Located in beautiful North Zealand (Nordsjælland), you find one of the most attractive hotel and conference centers in Denmark. An old manor house with the addition of a new, modern-style wing creates a unique atmosphere combining old fashioned charm with completely modern facilities.

Comwell Borupgaard is located 400 m from Oeresund (Øresund), about 40 km North of Copenhagen (København) and 3½ km South of the city center of Elsinore (Helsingør).

If you arrive from Copenhagen, it is quite easy to come by public transportation. Take the train on the coastal route (Kystbanen), direction Elsinore (Helgingør). You may leave from the Central Station, from stations at Nørreport or Østerport or other stations on the costal line. Trains are leaving every 20 minutes. The trip to Snekkersten is about 45 minutes. Snekkersten is the second but last station before Elsinore. Upon arrival at Snekkersten, leave the station towards North, step across the street and here you see the small lane leading up to Comwell Borupgaard. You will have to walk about 250 m.

Take the train Southbound for Copenhagen one station and get off at Snekkersten, or get a taxi for the 3½ km ride. (Ferries to and from Sweden leave every 20 minutes from Elsinore to Hälsingborg in Sweden. The ferry to Oslo may be boarded at Hälsingborg).

Drive North, direction Elsinore (Helsingør). When the motorway ends, continue straight on towards Elsinore on the Kings Road (Kongevejen). At the second roundabout turn right towards Snekkersten following O3, “Klostermosevej”. Drive about 1½ km until you reach a railway viaduct. Do not go under this but turn left on “Nørrevej”. After about 800 m you reach the entrance for Comwell Borupgaard on your left.

By Car on the Coastal Road (Strandvejen)

Halfway between the 38 km milestone, at Skotterup, og the 39 km milestone, at Snekkersten, you see a road, ”Klostermosevej” leaving in the direction of Northwest (opposite th coastal side). Follow this about 650 m until you have passed under two railway viaducts. Now turn right on “Nørrevej”. After about 800 m you see on your left the entrance to Comwell Borupgaard. 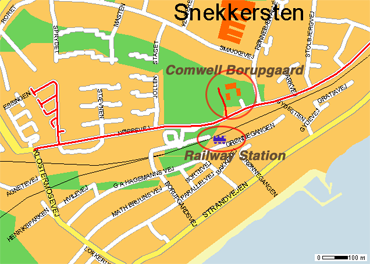 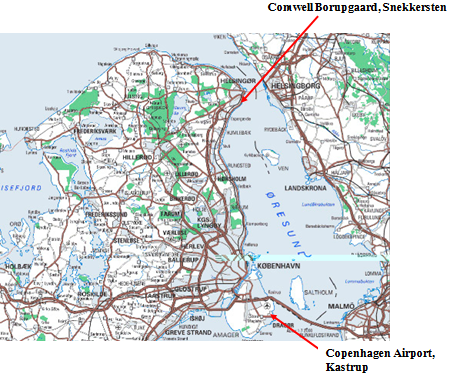